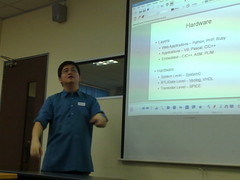 Hardware
First, I started by defining why Arduino is not Open Source Hardware. This falls squarely into the realm of embedded software programming. While you can work very closely with the hardware, you are still limited by the capabilities of the hardware. The actual layer that I talked about allows you to design the hardware itself. So, one is no longer limited by the hardware layer at all.

Hardware is further broken up into layers:

Open
Of course, there are lots of open source hardware designs out there, mostly found on OpenCores.

I gave a guy the example of the Arduino. If you work with Open Source Hardware, you can actually build a super Arduino – take an open source AVR core and couple it with a ethernet core, a crypto core, a video core and then you’ve got a souped-up Arduino without the limitations. You have just opened up a whole new market.

There, a quick talk on Open Source Hardware.